The Company remains focused on strong long-term demand fundamentals driven by continued growth in the electric vehicle (EV) segment and a recovery in the energy storage system (ESS) segment. As a result, Orocobre maintains long-term demand forecasts in line with the consensus of other major lithium producers, in the range of 17% to 20% CAGR between 2018 and 2025. 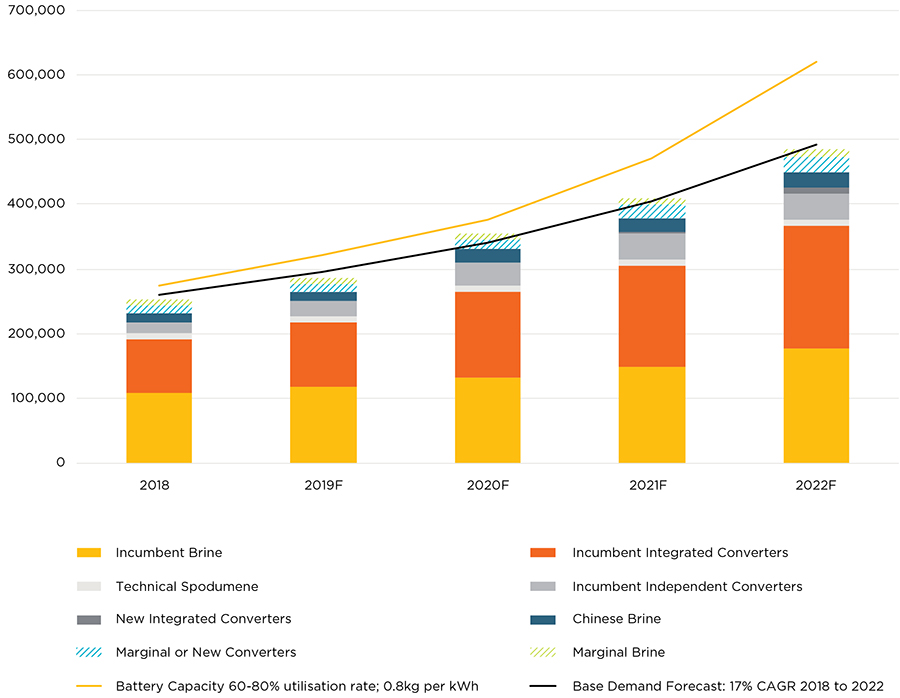 Over the course of FY19 lithium chemical prices in the seaborne market and the Chinese domestic market converged as China’s decreased demand and macro-economic factors began to impact the global lithium and battery supply chain markets. China’s domestic lithium prices started to decline during the March and June FY18 quarters as demand from the Chinese battery supply chain softened in response to a more stringent Chinese EV policy supporting higher battery energy density and range. In addition to these market-related factors a deceleration of China’s economic growth and escalating trade tension with the US raised concerns of a current account deficit due to trade imbalances. With these concerns in mind, the Chinese battery supply chain and domestic suppliers began to destock in the first quarter of FY19.

Traditionally, large Chinese producers of lithium carbonate focused on the domestic market on account of its accelerating growth and a costly 16-17% VAT and export tax. During the December quarter China had become a net exporter of lithium carbonate for the first time in over eight years, further encouraged by a price arbitrage toward the seaborne market and a reduction in the VAT from 16% to 13%. Chinese suppliers initially targeted the largest ex-China battery markets of South Korea and Japan, while supplying Europe with both battery and technical grades. However these markets were already well-served by Chilean producers who had built a solid long-standing market share. As a result Chinese suppliers offered competitive pricing to encourage sales to ex-China markets. By the March FY19 quarter there were widespread reports of high inventory levels amongst ex-China customers as a result of an optimistic forecast of cathode and battery demand which had a subsequent impact on lithium carbonate demand.

As a result ex-China customers have had to manage elevated inventory levels which has had an impact on demand. Some seaborne suppliers actively avoided the Chinese market when prices began declining, however with key traditional markets experiencing high inventory levels seaborne suppliers recommenced shipments to China at significantly discounted price levels in order to meet domestic market price levels in China. Accordingly, the China CIF price converged with the China spot price during the June FY19 quarter closing the price arbitrage and returning China to its more traditional role of net importer of lithium carbonate.

HSBC estimates ~50% of new supply to 2025 is uneconomic below market prices of US$9k/t¹, which could possibly result in supply rationalisation during FY20 and a correction to the lithium market balance. 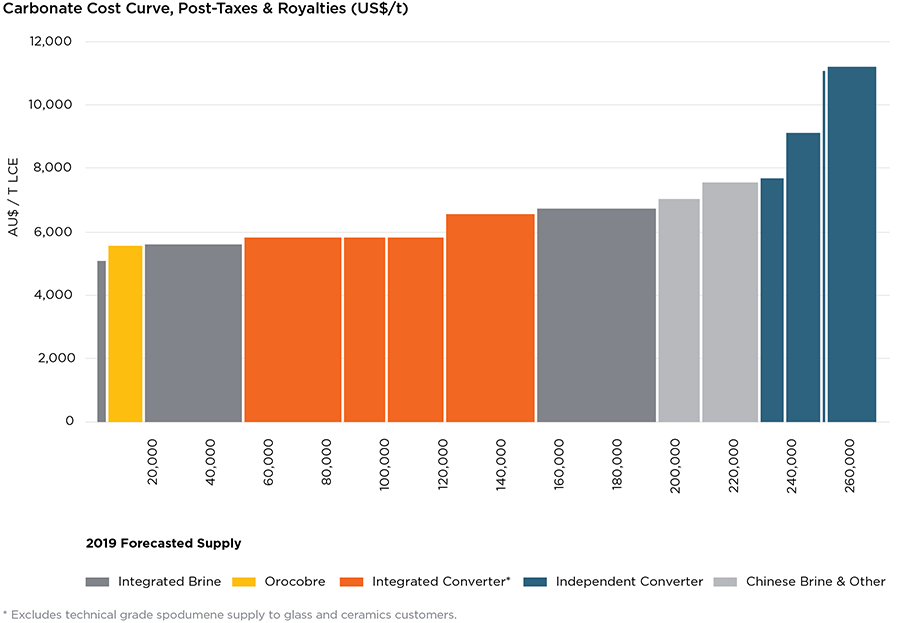 Despite the challenges faced by the Chinese EV industry in FY19, China’s new energy vehicle industry remains a strategic priority for the country and several supportive strategies were initiated during FY19.

After removing the 50% limit on foreign ownership of Chinese EV joint ventures in April 2019, the Chinese Government extended this approach further upstream by removing the approved battery suppliers list which opened the industry to foreign firms. The list was originally developed to support local Chinese participants in the battery industry with government subsidies.

In addition to encouraging foreign participation in China’s EV industry, the Chinese Government increased penalties for the manufacture and use of internal combustion engines (ICE) through higher taxes, the continued use of an ICE registration lottery system, and the implementation of new vehicle emission standards in provincial regions. These new vehicle emission standards require vehicles sold and registered to meet benchmark global standards. Late in FY19 China’s emissions standards were lifted from level five to level six, which is anticipated to have a notable impact on ICE production.

Like China, the European Union (EU) remains focused on continued reductions to CO₂ emissions, announcing current penalties will be increased in CY21. This announcement came late in FY19 but is anticipated to encourage EV manufacturers to accelerate investment in EV manufacturing facilities and engage with upstream partners including battery, cathode and raw material suppliers. Based on CY18 CO₂ emissions data, Macquarie Bank estimates that it will be ~70% more expensive to maintain 2018 ICE sales volumes compared to investing in the necessary capacity and technology for EV production².