Orocobre is the newest brine based global lithium carbonate supplier in over twenty years through its flagship operation, the Olaroz Lithium Facility. After seven years of planning, developing, construction and commissioning, the first sale of lithium carbonate from the Olaroz Lithium Facility occurred in late April 2015 and volumes have been increasing since that time.

Olaroz hosts a JORC/NI43-101 compliant, high quality, low-cost and long life resource. The measured and indicated resource of 6.4 Mt LCE is capable of sustaining current continuous production for 40-plus years with only ~15% of the defined resource extracted.

The Olaroz Lithium Facility is located in Jujuy Province in northern Argentina, approximately 230 kilometres northwest of the capital city of Jujuy. The operations are at an altitude of 3,900 metres above sea level and produce lithium carbonate from the Salar de Olaroz brine resource which contains high concentrations of lithium and potash brine.

The Facility is supported by favourable conditions in terms of both the operating environment and local infrastructure. Very limited rainfall combined with dry, windy conditions enhances the brine-evaporation process. The Facility is also serviced by gas pipelines, high voltage electricity, and paved highways. Three major seaports, Buenos Aires in Argentina and Antofagasta and Iquique in Chile are serviced by international carriers and are easily accessible by road and/or rail. 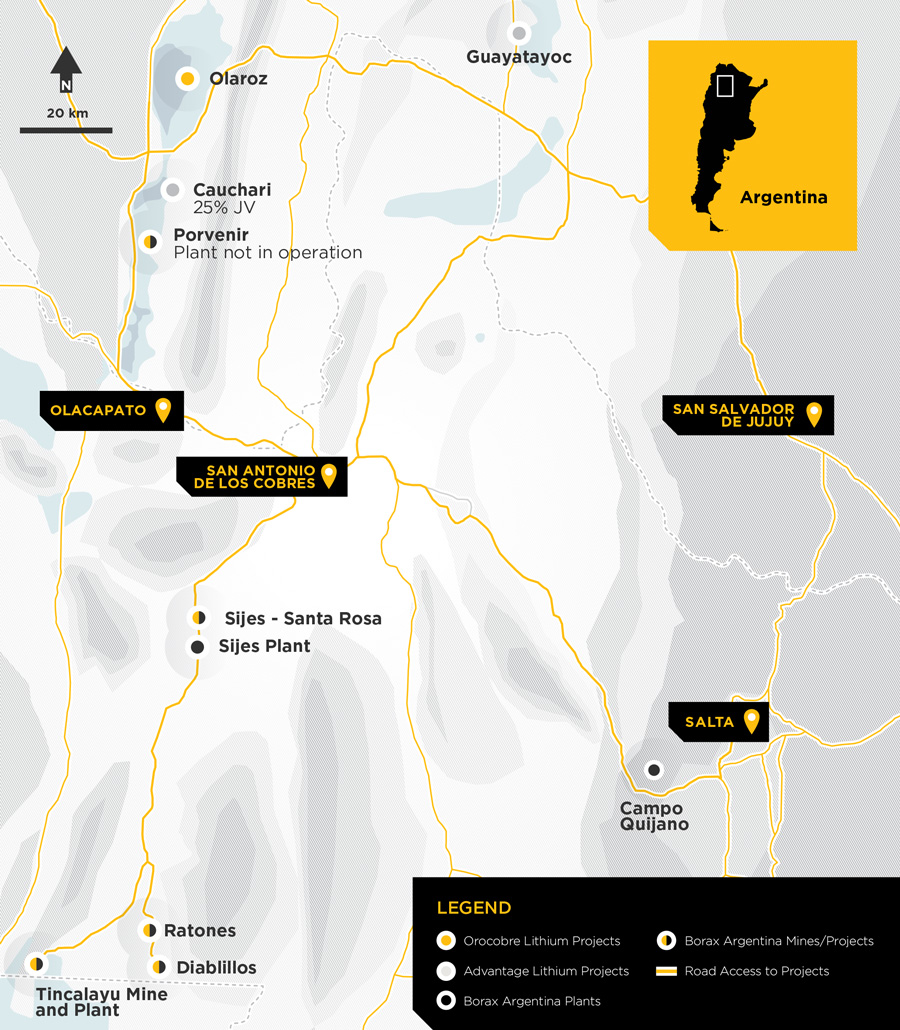 The partnership with TTC began in January 2010, through the execution of a definitive joint venture agreement to develop the Olaroz Lithium Project. This agreement provided a comprehensive financing plan structured to secure TTC’s direct participation in, and support for, funding the planned development at Olaroz. In turn, TTC’s participation in the project was through a 25% equity stake at project level. In a business where product quality is paramount, TTC’s investment provided a strong endorsement of the quality of the Olaroz resource and the high purity battery grade product produced at the Olaroz Lithium Facility.

JEMSE became a project partner in June 2012. JEMSE’s participation in the project is held through an 8.5% equity stake at project level which provides the Provincial Government with a direct interest in the development of the Olaroz Lithium Facility.

The Olaroz Lithium Facility is managed through the operating company, Sales de Jujuy S.A. The shareholders are Sales de Jujuy Pte. Ltd. and JEMSE. The corporate structure is shown below: 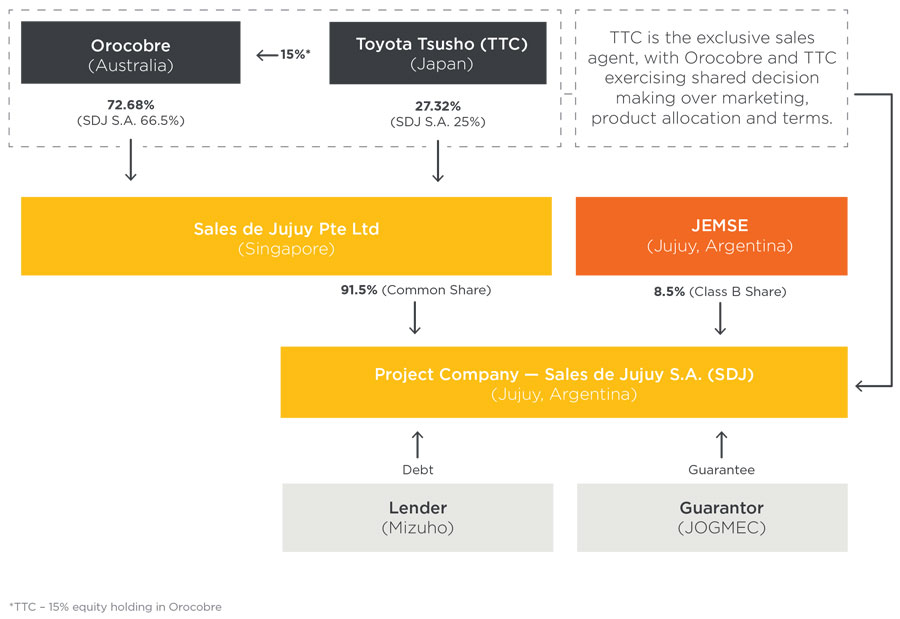 Salar de Olaroz is a long life and high quality resource which is capable of sustaining continuous production for forty-plus years with only 15% of the defined resource extracted. The original design of the Olaroz Lithium Facility allows for future developments and/or expansion plans to occur in line with market demand. The Stage 2 expansion at Olaroz can occur at a substantial discount per tonne of capacity when compared to the original capital cost.

The estimated measured and indicated resource of 1,752 million cubic metres of brine at 690 mg/L Lithium, 5,730 mg/L Potassium and 1,050 mg/L Boron at the Olaroz Facility equates to 6.4 million tonnes of lithium carbonate and 19.3 million tonnes of potash (potassium chloride) based on 5.32 tonnes of lithium carbonate being equivalent to 1 tonne of lithium and 1.91 tonnes of potash being equivalent to one tonne of potassium. Subsequent independent modelling has indicated improved lithium brine grades of 825 mg/l, which allowed for an increase in annual lithium carbonate production. For comparative purposes, an average lithium grade of 800 mg/L is similar to FMC’s Hombre Muerto operation and approximately double the grade of both the Silver Peak, Nevada and Rincon, Argentina operations. The Olaroz Facility’s Mg:Li ratio is also low (which is desirable for processing) at around 2.4, compared to Atacama, Rincon and Uyuni at 6.4, 8.6 and 19 respectively. Only Silver Peak and Hombre Muerto are lower at 1.4.

The processing method at Olaroz is based on existing brine treatment operations with modifications tailored to suit the brine chemistry and climatic conditions at Olaroz. Lithium brine operations typically have a much lower cost of production than hard-rock lithium deposits. The cash operating cost of approximately US$3,500 – $4,000/t positions the Company as being one of the lowest cost lithium producers globally.

The processing method begins with the extraction of lithium-rich brine from bore fields drilled on the salar. The brine is then transferred to a series of evaporation ponds which utilise solar radiation and wind for evaporation and concentration along with a precipitation process to remove impurities. The concentrated brine is then fed into the lithium carbonate plant which precipitates, filters and dries the finished high-quality lithium carbonate product.

Unlike traditional mining operations and the operations of some of our brine-based peers, the Olaroz Lithium Facility does not require tailings facilities. Liquid waste from the production process is immediately fed back to the pond system. In terms of mineral waste, we manage salt (mainly halite and sylvite) build-up in our evaporation ponds through a process of salt harvesting, which is conducted every three years.

Once harvested, these salts are transferred to an onsite salt stockpile, where leaching and drainage enables the recovery of highly concentrated lithium brine. So not only do our waste minerals (salts) mirror those naturally occurring in the local environment, they also provide an additional, high-quality source of lithium for use in production. 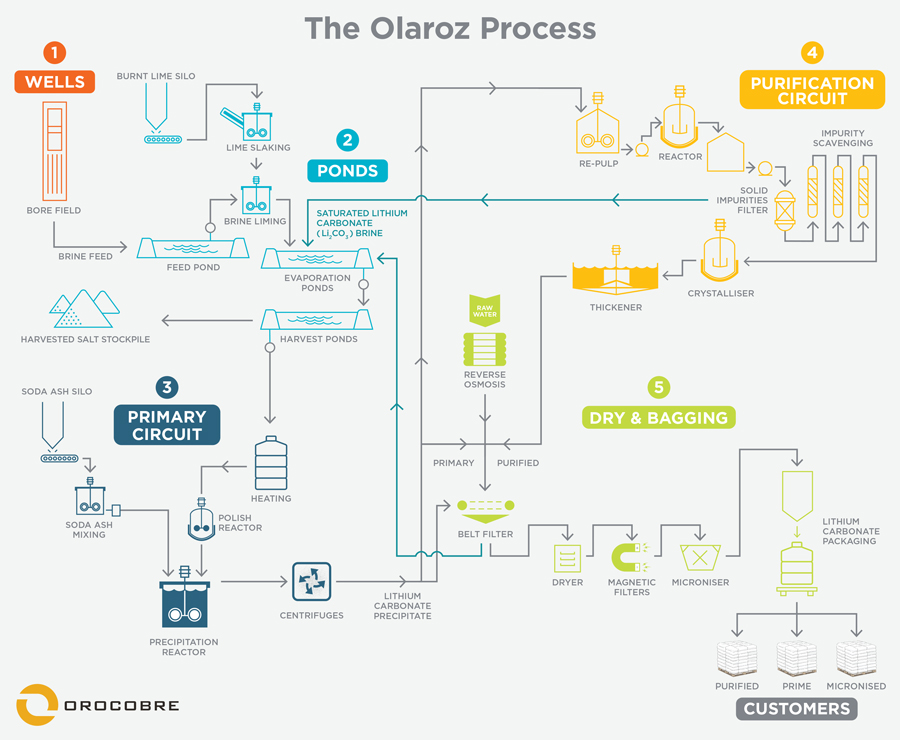 The main markets for primary grade product are the ceramic, chemical and glass markets, with purified grade typically sold to cathode manufacturers for use in the production of batteries.

The Olaroz Lithium Facility has a low environmental footprint because of the following aspects of the process:

The increased Stage 2 uses a simplified design including a primary lithium carbonate circuit but excluding a purification circuit. This expansion plan will result in capital expenditure of approximately US$285 million including a US$25 million contingency and retains the lower risk of implementation as the project is based around a simple duplication of bores, ponds and primary circuit of Stage 1 at Olaroz.

The capital cost intensity of the 25,000 tonne per annum expansion increased from the previous 17,500 tonne per annum principally due to the increased accuracy with the engineering study compared to the previous scoping level, additional redundancy in the design, increases in indirect costs and inflationary pressures. However, this capital remains extremely competitive when compared with greenfield developments.

All necessary permits have been granted for process water, brine extraction, additional bores, new pond and plant construction from the Jujuy Provincial Government for the expansion.

During FY19 the Stage 2 Expansion project at Olaroz achieved a number of milestones including the construction of new evaporation and harvest ponds, roads and production boreholes. The expansion of existing site infrastructure and camp accommodation continued including a new health centre for the extended work force, office space for the expansion team and warehouses for equipment. Construction of additional liming plant capacity has progressed permitting brine stocks to be increased and facilitating the rapid filling of Stage 2 ponds. The Olaroz Stage 2 Expansion’s Finance Facility was finalised during Q1 FY20. 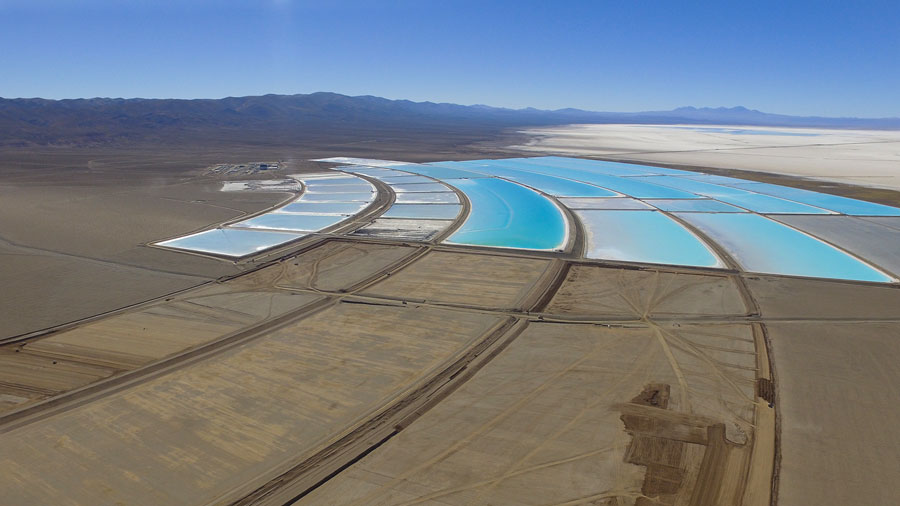