Advantage Lithium Corp. (Advantage) is a resource company specialising in the strategic acquisition, exploration and development of lithium properties and is headquartered in Vancouver, British Columbia.

In 2016 Orocobre divested several of its lithium brine exploration projects to Advantage in exchange for shares in Advantage. Orocobre currently holds 34.7% of Advantage’s issued capital.

Additionally, Orocobre and Advantage entered into a Joint Venture Agreement to develop the Cauchari project (Cauchari JV) situated immediately to the south of the Olaroz Lithium Facility. Orocobre holds a 25% interest in the Cauchari JV.

Orocobre has appointed two directors to the board of Advantage. This transaction enabled these high potential assets to be developed and advanced without need for any further input of capital or management time by Orocobre.

*** On 19 February 2020 Orocobre Limited announced it had entered into a definitive agreement pursuant to which Orocobre would acquire 100% of the issued and outstanding shares of Advantage Lithium Corp. that it does not already own. Click here to view the Full ASX Release dated 19 February 2020 ***

The Cauchari JV project is a 25/75 joint venture between Orocobre and Advantage situated to the south of the Olaroz Lithium Facility and adjacent to the Cauchari project of Lithium Americas Corp. and Ganfeng.

Cauchari’s successful drilling program has seen some of the deepest holes drilled in the Cauchari-Olaroz basin to date, with the Cauchari resource remaining open at depth and to the south.

During Q4 FY19 Advantage announced the engagement of WorleyParsons Chile S.A. who, in conjunction with independent resource consultants FloSolutions S.A.C., will complete a Pre-Feasibility Study (PFS) on the Cauchari JV project. The purpose of the PFS is to examine all production and processing alternatives and recommend an optimal way forward. The PFS will include a range analysis of production volumes and is scheduled to be completed during Q1 FY20. 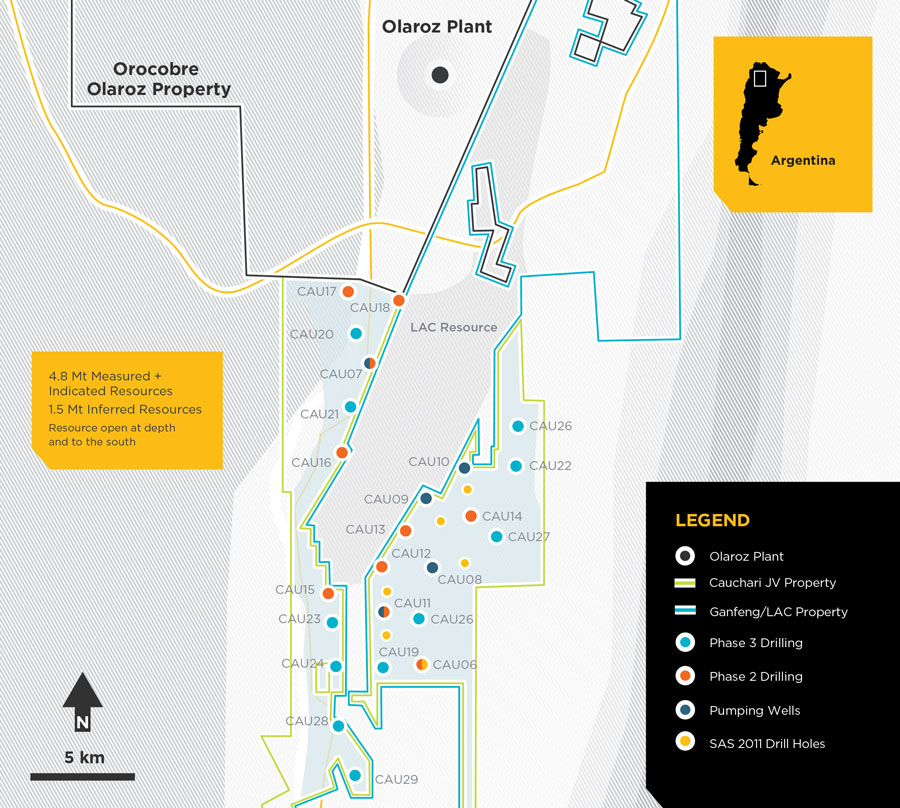 A NI43-101 Technical Report on the resource upgrade of the Cauchari JV Lithium Project in Jujuy, Argentina was completed in April 2019. The report, prepared by FloSolutions S.A.C., increased the resource to a volume of 1.9km³ of brine at an average concentration of 476 mg/l lithium equivalent to 4.8 Mt LCE in the Measured and Indicated categories. The Inferred resource is now estimated at 0.6km³ of brine at an average grade of 473 mg/l lithium equivalent for 1.5 Mt of LCE.

Advantage has the potential to fast track the exploration and development works at Cauchari. The chemistry of the project is similar to the nearby Olaroz deposit allowing for compatible processing.

There is a real opportunity for growth through the utilisation of strong regional infrastructure, local experience in permits and government and community relations.