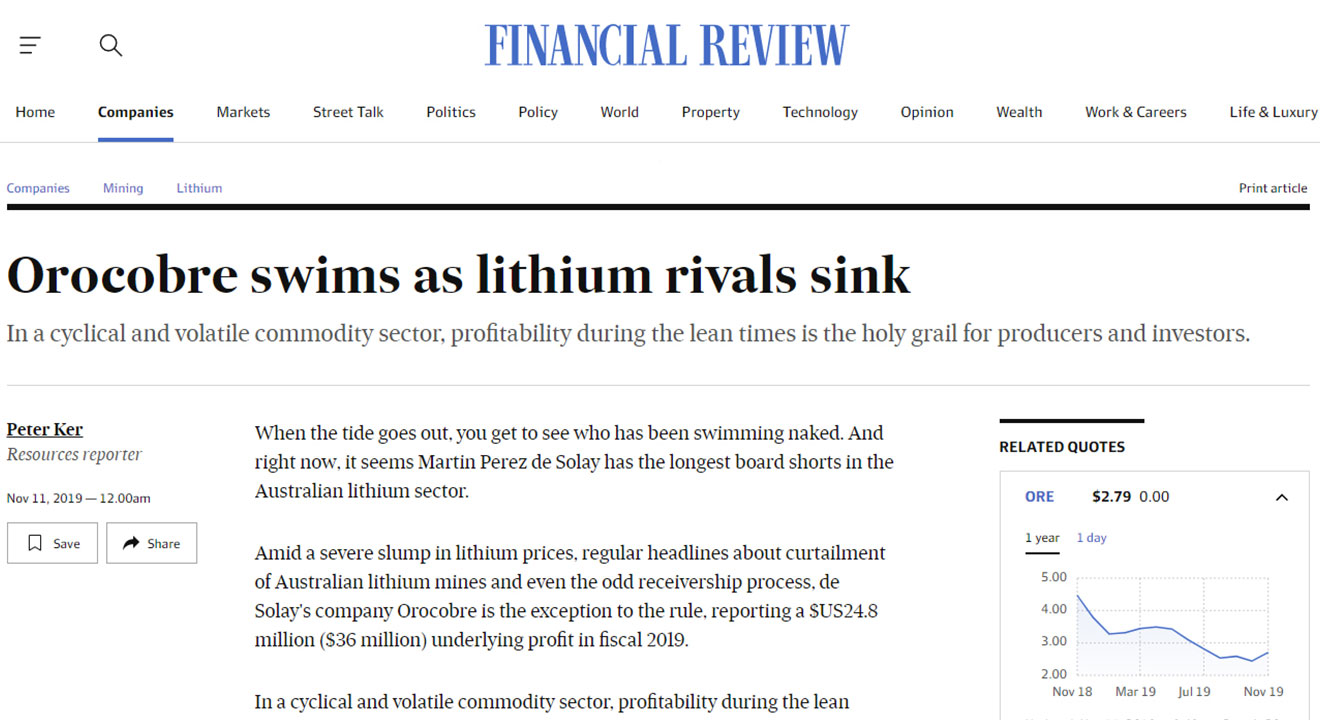 In a cyclical and volatile commodity sector, profitability during the lean times is the holy grail for producers and investors. When the tide goes out, you get to see who has been swimming naked. And right now, it seems Martín Pérez de Solay has the longest board shorts in the Australian lithium sector.

Amid a severe slump in lithium prices, regular headlines about curtailment of Australian lithium mines and even the odd receivership process, de Solay’s company Orocobre is the exception to the rule, reporting a $US24.8 million ($36 million) underlying profit in fiscal 2019.

In a cyclical and volatile commodity sector, profitability during the lean times is the holy grail for producers and investors. 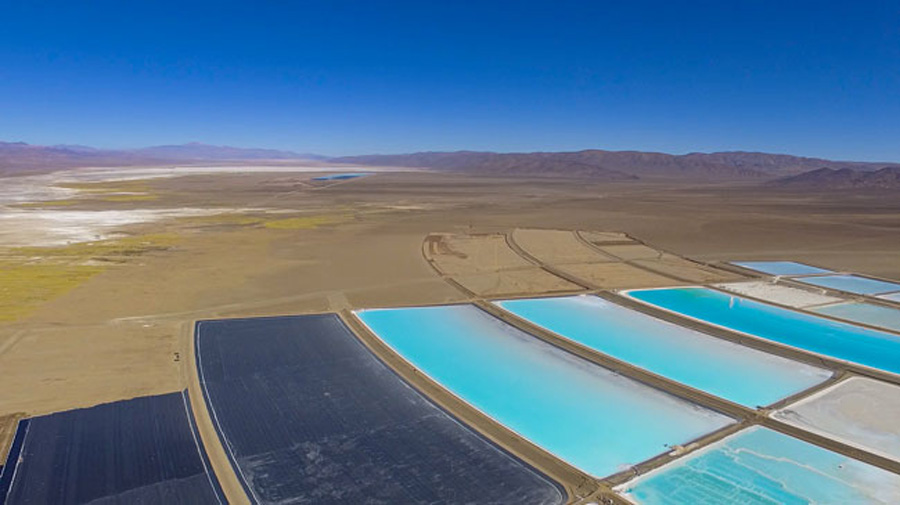 Chile’s SQM and US company Albemarle are to lithium what Rio Tinto and BHP are to iron ore; they’re the companies you expect to be turning a profit even in bear markets – like the one currently gripping the lithium sector.

That a heavily shorted, single asset company from Brisbane, with a market capitalisation of just over $700 million, was able to join those multinationals on the profitable side of the ledger is quite the achievement.

Orocobre’s fiscal 2019 cashflow statement provided further encouragement, confirming the company generated $US8.48 million of “cashflow from operations” – a line item that is less malleable to creative accounting than “profit after tax”, so giving investors the clearest view of whether a company’s core asset is actually making money.

Orocobre owns 66.5 per cent of the Olaroz lithium facility in Argentina’s high desert, where briny groundwater is pumped to the surface, concentrated in evaporation ponds, then purified into lithium carbonate of more than 99 per cent purity.

Making a buck at Olaroz became harder in the three months to September 30: lower lithium prices and weaker than expected production ensured cash margins were 68 per cent lower than the same time last year.

But the asset was still generating cash in the period, and Orocobre’s low profile stability was a far cry from life at ASX listed rivals Galaxy Resources, Pilbara Minerals and Mineral Resources Limited, all of whom announced some degree of mine curtailments in the past three months.

The comparison to ASX listed lithium miner Alita Resources, which went into receivership during the September quarter, was even starker.

In a dreadful year for lithium stocks, Orocobre shares have been the standout.

In contrast, Galaxy shares have halved since January 1, while Pilbara Minerals has lost 54 per cent and Altura 53 per cent over the same period.

Orocobre’s status as the most investible lithium stock on the ASX is confirmation that investment trends in the lithium world have turned on their head over the past two years.

In the heady days of early 2018, companies extracting lithium from hard rock spodumene in Western Australia were all the rage; the likes of Galaxy, Pilbara, Altura Mining and Alita’s antecedent Tawana Resources were boasting some of the most extraordinary share price growth witnessed on the ASX in years.

The trend was driven by battery manufacturers’ growing preference for lithium hydroxide – which allows a battery to store more energy – rather than lithium carbonate, which is the product traditionally sold by South American brine producers like Orocobre and SQM. 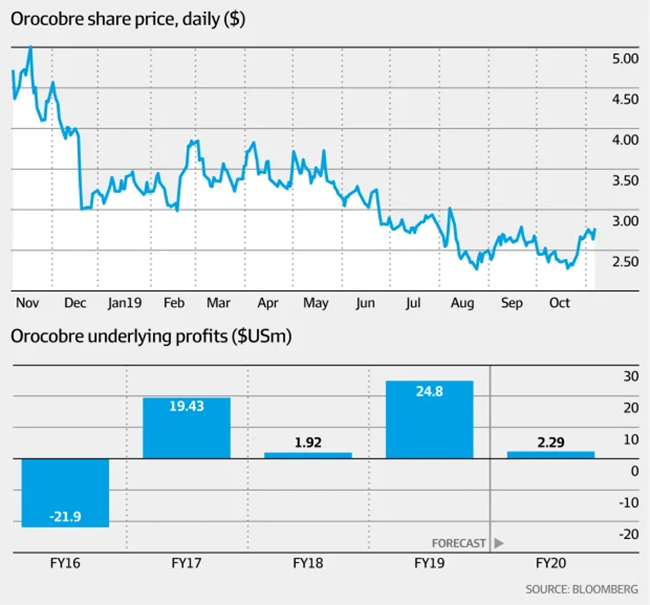 The hydroxide trend threatened to erase the unit cost advantage traditionally held by the South American brine producers, so long as the hard rock miners (whose work is much more labour and energy intensive) could build converters that turned their spodumene directly into lithium hydroxide.

Brine production in South America became even less fashionable when Chile imposed a tougher royalty regime on lithium production and Argentina introduced a new tax on the export on primary products, including lithium.

The export tax, which charges 4 Argentine Pesos for each US dollar of product exported, was supposed to be temporary. But 14 months after it was announced, Canaccord Genuity analyst Reg Spencer does not expect to see it removed any time soon.

“I think it is safe to say that export duty is not going to be temporary, not for the forseeable future anyway,” he said.

The hydroxide thematic and the Argentinian export tax only built on investor frustrations with the slow commissioning of Olaroz through 2017 and 2018 and a broken promise around an equity raising, to ensure Orocobre was far from flavour of the month in early 2018.

But fashion changes eventually, and investors in the hard rock lithium miners have discovered this year that they can’t bank potential.

While the lithium hydroxide trend does look positive for Australia’s hard rock miners in the long term, building the necessary conversion capacity takes time and money.

“Those hard rock based producers of hydroxide or carbonate are only low cost if they are integrated, and to be truly integrated, the mine and the converter has to be in the same country because otherwise you risk being accused of transfer pricing,” said Mr Spencer.

In the meantime, companies like Galaxy, Pilbara, Altura and Mineral Resources have been left to sell spodumene concentrate; a lower value product than lithium carbonate, and a product that is fetching ever lower prices because of abundant supply.

None of them appear to be exporting spodumene concentrate profitably at the moment, although Galaxy might have been profitable in the September quarter had shipment timings been slightly different.

Albemarle told investors on Friday that lithium customers were holding about six months of inventory at the moment, which would take 12 to 18 months to be worked through.

While lithium carbonate prices have also fallen significantly, they have not fallen enough to push producers like Orocobre into the red.

“We invested in that asset because it makes money even at the bottom of the cycle in lithium prices,” said AustralianSuper’s small caps portfolio manager Luke Smith, when asked why the nation’s biggest pension fund had chosen Orocobre as one of its two exposures in the lithium sector, along with Piedmont Lithium.

Aside from its low production costs, Smith says his team likes Orocobre’s strong links with Japanese customers and lenders. Those links are currently being deepened with construction of a lithium hydroxide processing facility in the Japanese province of Fukushima.

“We like it, (Olaroz) is a good strategic asset, it has got a very good strategic partner in Toyota Tsusho, it has Japanese government debt guaranteed, the cost of debt is very low and it is an asset that will be here for multiple decades,” said Smith.

If profitability in fiscal 2019 was a big achievement, repeating the effort in fiscal 2020 is looking tougher.

Lithium prices have continued falling since June 30, and expectations that prices would reach their nadir before Christmas are rapidly being scrapped.

US lithium producer Livent indicated on Thursday that it expects lithium prices, including for lithium carbonate, to continue falling in the first three months of 2020.

But analysts believe Orocobre will cling onto profitability (and positive cashflow from operations) in fiscal 2020, with consensus measured by Bloomberg pointing to an underlying profit of $US2.29 million.

Overall cashflow, including sums invested in capital projects, will almost certainly be negative in fiscal 2020, as Orocobre spends on stage two of Olaroz and the Japanese hydroxide facility; projects that will expand and diversify its production profile.

These projects may make some investors nervous; Orocobre took much longer than expected to ramp up the first stage of Olaroz. After three years in operation, Olaroz still only producing at about 70 per cent of its official capacity.

Mr Spencer says all mining project timelines should be taken with a grain of salt as schedule blow outs are common. But he said the second stage of the Olaroz project might be less challenging to deliver than stage one.

“That circuit allows them to produce battery grade and in the past that is the part of the stage one plant that had some of the problems.

“So the production from stage two is via a less complex process.”